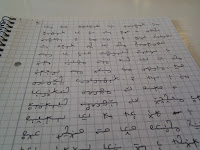 I recently came across an old note pad I had been using about two years ago. I like to keep all my old note pads; they’re like raw dumps of what I was doing then and the ideas I was playing around with. This particular one was the one I was using while reading the World’s Writing Systems, the mother lode for anyone interested in writing systems.

The image on the right is one of the pages. After reading about so many different writing systems I just had to try making my own. The underlying language is English but unlike the latin system it has only a cursive form and makes heavy use of diacritics, which makes it a lot more compact and altogether just a very different kind of system to use.

Actually, what you see is the system in its most primitive and childish rendering. It’s very geometric and angular, like something you might see on an alien spaceship in a bad science fiction movie. That’s not exactly the look I was going for. But then I had only just learned it when I wrote this. My idea was to actually learn to use it, learn which corners could be cut without losing readability, evolve some comfortable ligatures, basically the same thing I did to get from the handwriting I had when I first learned the latin alphabet to my current utilitarian but definitely more aesthetically pleasing hand. That takes a long time but if I don’t lose interest before then I’ll be back in 10-15 years to present a much nicer-looking cursive handwriting.

This entry was posted in misc. Bookmark the permalink.